Not so long ago…

In a podcast not so far away…

During a screening of the ever-fantastic “Empire Strikes Back”…

There came into being an idea that would touch the hearts of every member of the PAX Prank group and change the very course of pranking into not only a source of fun, but a haven of style, finesse, and righteousness… 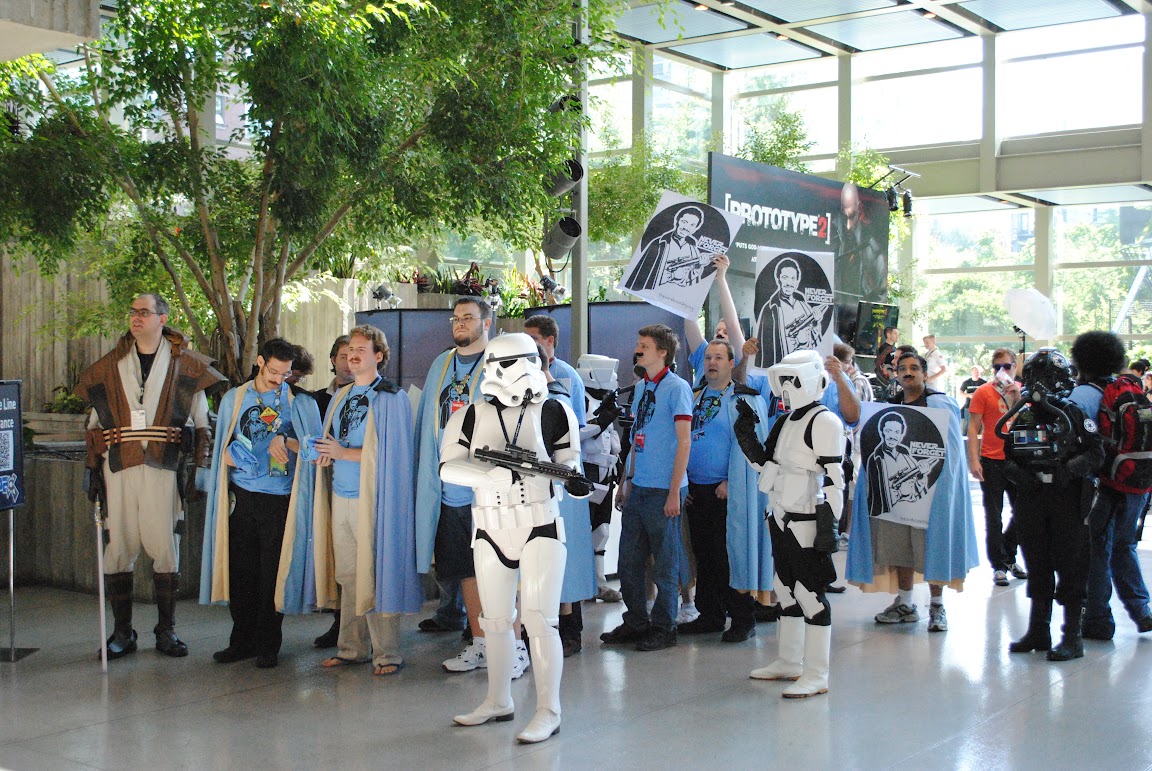 It was during the PAX IRC podcast movie commentary of Empire Strikes Back that the idea to never forget the ever classic and wonderfully stylish Lando Calrissian was born. Remembering the fantastic success of the organization of the Salmon Security service, they saw in themselves and in us all a deep and abiding love and respect for the legendary Lando. We realized that the only step we could take from here was to create The Lando Society: “Promoting Interstellar Commerce and Good Looks Since the Old Republic”. We spoke of the idea and it spread like wildfire, soon gathering a sizeable following that would work to ensure that all at PAX would hear of the good word of Lando Calrissian.

We first had to take the steps of preparation. If we were to show the respect deserved by such an icon of righteousness and good looks, we would have to do it right and we would have to do it in style. We had three goals in mind for this undertaking:  1) To preach the good word of Lando to everyone willing to listen across PAX through different staged events, 2) To ask people to sign a petition to get an ancestor of Lando Calrissian in Star Wars: The Old Republic which we would hand to the representatives from BioWare, & 3) To encourage donations to St. Jude’s Children’s Research Center, one of the favorite charities of the great actor that portrayed Lando Calrissian (Billy Dee Williams).

Our internet guru Zerzhul created forums for the group to use for discussion, organization, and planning each of the events to take place leading up to PAX and at PAX itself. We asked Yamara to come up with a fantastic logo design which Tony was able to get printed onto shirts for all of the members to wear. We additionally plotted the design onto large posters to hold up throughout our events at PAX. She was also able to create great informational pamphlet designs based on brainstorming sessions on our forums.  Alatheia and Moe Fwacky printed, folded, and attached mustaches to the pamphlets and we were able to hand them out to those that wanted to learn more about the intrepid Lando. We had the great stitching hand of Punzie to make authentic Lando capes to wear as we went about PAX in promotion of The Lando Society. Foam Brain made some great Lando Society buttons for the group to pass out to the masses. Lastly, Yamara and Zerzhul were able to combine forces to make our fantastic website (www.thelandosociety.org) to promote the petition and donations to St. Jude’s. We had the pieces put together and we were finally ready to storm PAX.

Before we were able to get started, we received a random text from a special individual. Krupal Desai (see the Salmon Security Prank) had apparently heard of our efforts to put together a new organization this year and excitedly asked if he might be able to contribute to this year’s efforts. We gave him the details and let him know that his presence would be welcome at PAX. It was a sign of the many good things that were to come.

On the first day of PAX, we kept things low-key. We passed out hundreds of promotional flyers to raise awareness for our big event Saturday, but by Friday afternoon we couldn’t contain ourselves any longer. We donned our Lando shirts and held votive candles and piled into elevators with as many Lando Society members as could be crammed in at a time. Many random people saw the collective and stood in awe at the elevators full of Lando Society members. After a few jam-packed elevator rides we began a vigil across PAX that would give people a taste of what was to come. We included a stop off by the booth of Wil Wheaton to swear him into The Lando Society. He gladly accepted his Lando shirt and proceeded to read some of the great quotes from The Lando Society pamphlet (including one from our friendly, neighborhood IRC bot Frellnik) to preach the word of Lando. We were later approached by Han Solo, who decided to join the cause of The Lando Society. Han would turn out to be a strong and outspoken member of the group and ensured to all that Lando is not only a great friend of his but a fantastic man that no one should ever forget. By the time we were done with the vigil, people across the convention center were buzzing about what just took place and obvious excitement was building for what was in store. 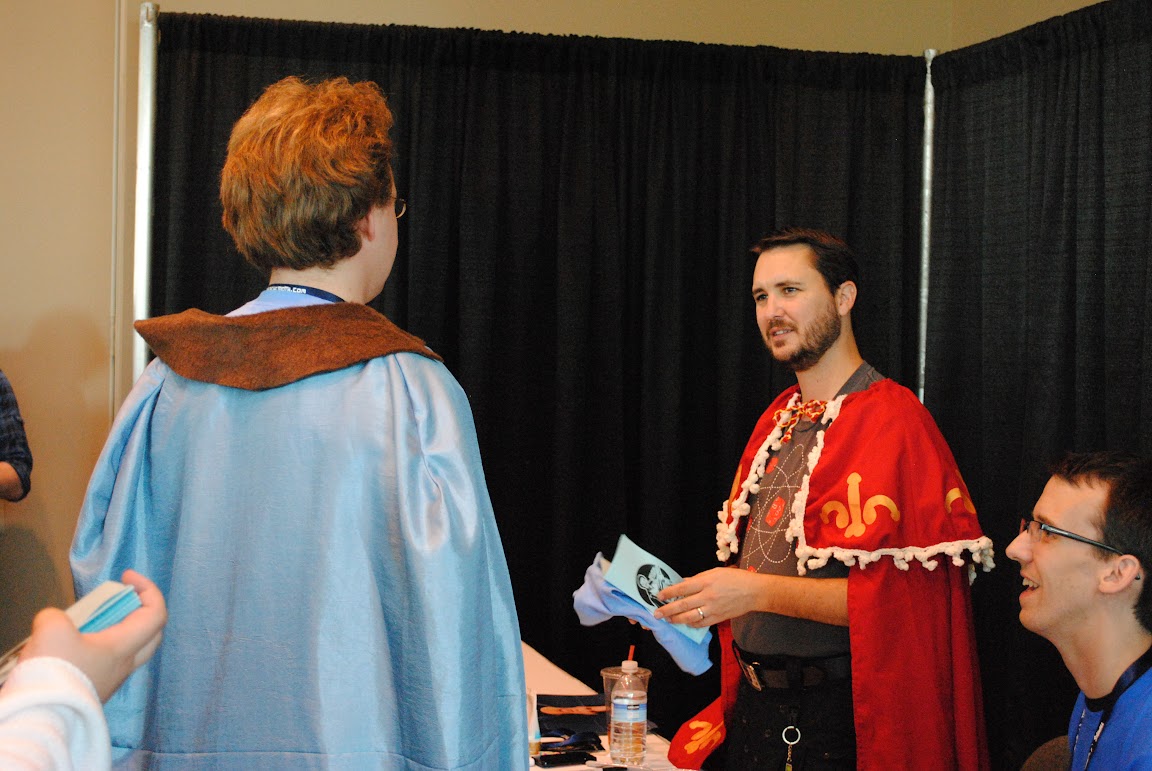 When Saturday arrived, we were all excited about the upcoming rally. We gathered posters and pamphlets, put on our capes and shirts, and we got ourselves ready to preach the word of Lando! We made a quick stop first before preaching to the masses to gain one more convert. We stopped by the G4TV booth where we were able to swear in a new member to The Lando Society, but long time follower of Lando Calrissian: Adam Sessler. He excitedly donned a cape and a mustache and posed proudly with it to exclaim “Never Forget!” We all were proud to add a new and fiercely devoted member to our midst. From there, with strength of voice and will, we went out to the front of the convention center and fought for Lando! Many of us took to the megaphone to preach our own individual stories of how Lando moved us and showed us how he was a great man whose steps we should all follow. Moe shaved off his beard to leave only his beautiful Lando-inspired mustache for all to revel in. Even random bystanders took to the megaphone to preach how Lando had touched their minds, hearts, and souls. After such moving and emotional speeches, we began chanting calls and songs to loudly promote The Lando Society. We handed out pamphlets with mustaches that all could wear while reading many great facts and quotes about the man. And after it was all said and done, we gathered and marched to the expo hall. 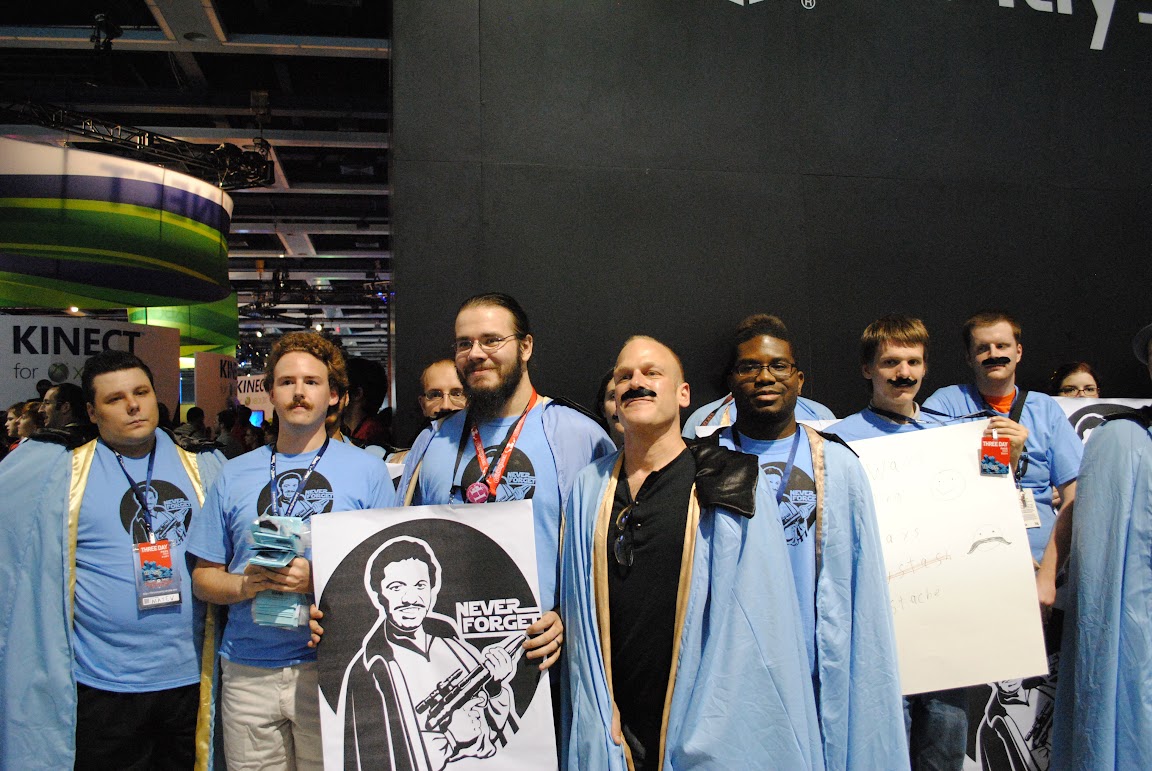 We marched in, chanting so loudly we could be heard over the many announcers and games going on. We chanted so loudly that they could hear us in Butt City. We took that strength and energy to the BioWare booth and let them know that Lando Calrissian would never be forgotten. We were stopped by many people asking questions about our cause (including Kotaku) and even had some wonderful and inspiring articles about us on MSNBC and on TORWARS. We answered with excited explanations and chants to show them who we fight for and what we will do. Eventually we were met by a member of the BioWare team and we passed along a shirt and pamphlet as a sign that we were here and ready to bring them a message. Lastly, we marched to our brethren of Loading Ready Run and inducted them by oath into The Lando Society as well. Our day was a success and our message was loud and clear to all of PAX: We Fight For Lando and We Will NEVER FORGET!

But there was more to do… 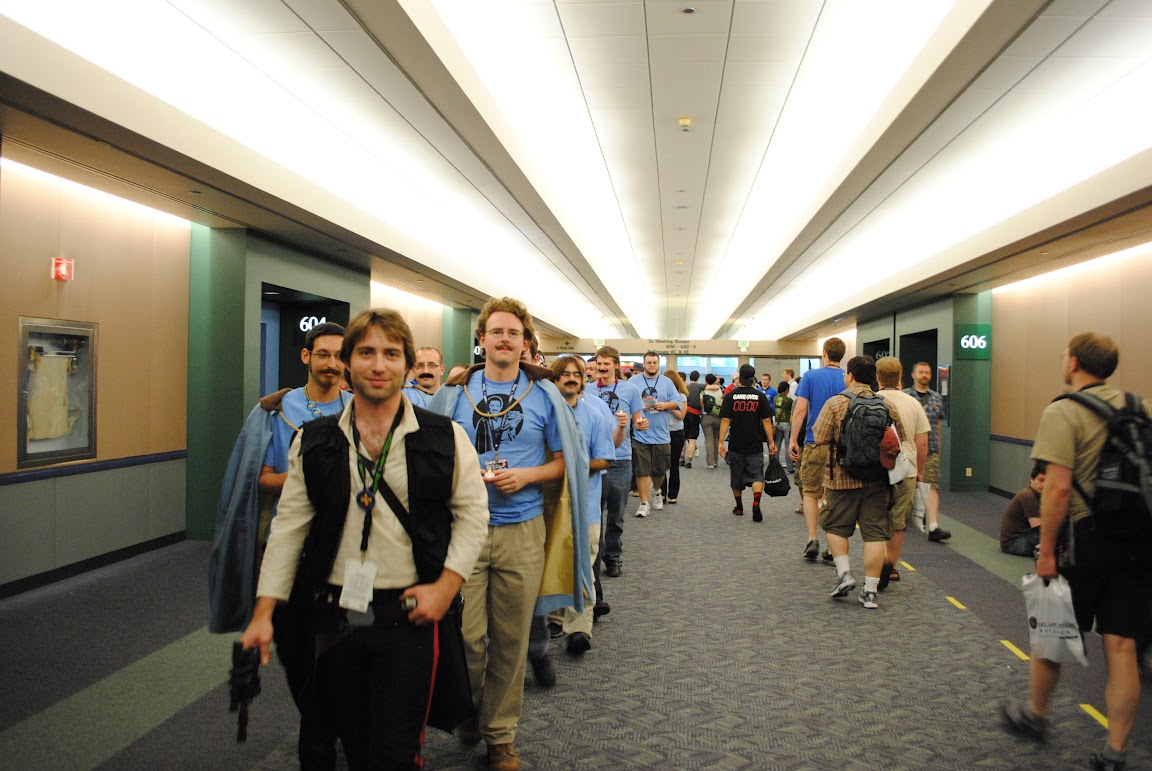 The final day of PAX had arrived and we had two more tasks at hand. We set off at midday for our first task: to take The Lando Society to Mike and Jerry’s signing session. We had a plant in the line with cape and shirt at the ready for our surprise. When he arrived near high noon to the table of Mike and Jerry, we were cued by the Throne Room music from A New Hope to begin the march of The Lando Society. With an honor guard of jedi and stormtroopers of the 501st, we paraded to the creators of Penny Arcade to begin the induction ceremony into The Lando Society. They were excited to join our great cause and gladly accepted our gifts of shirts, capes, and mustaches. It was a fantastic sight to see and would have brought a tear to the eye of even Lando. We left the building triumphant, with one last step to take. 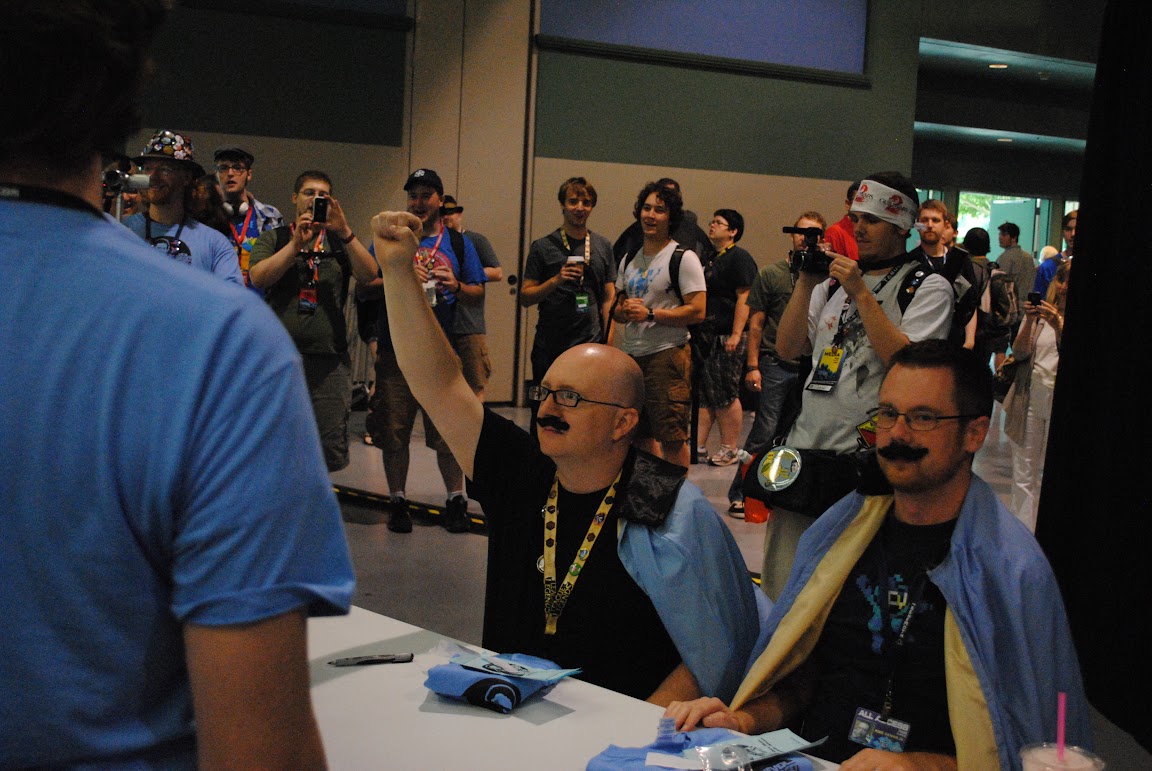 We were tired and some of our brethren had fallen, but the remainder summoned the last of their energy in order to take our fight to the BioWare panel for their new Star Wars game. We were stopped upon arrival by one of the producers to the game but once the chanting begin and calls for Lando arose from the surrounding crowd, he was forced to concede and let us by. We engaged the crowd with our passion and, with Han Solo at our side, they continued to loudly chant the name of Lando. The energy and love for Lando was so great that we were able to convert Darth Vader by getting him to don a Lando mustache. Our cheers rang loudly into the theater as people entered for the BioWare panel, but our task was not done. As the panel continued, we sat and waited for our turn.

We hoped to see a member of the BioWare team come out and listen to our cause.

After the panel was completed and people had left, we had our chance.

The lead writer for Star Wars: The Old Republic, Daniel Erickson, came out to meet us and after we presented him with the hundreds of signatures on paper and online, he was moved to our cause. He told us that many fantastic Lando inspired mustaches would be found in the new game as well as a rare and difficult to find smuggler outfit that matched that of Lando. We were all moved by such generosity that we presented shirts to him for the BioWare team to show our appreciation for such graciousness and appreciation towards the great Lando Calrissian. It was a hard fought three-day battle across PAX to spread the word of Lando, but in the end no one that heard the call of Lando would ever forget Lando or The Lando Society.

This was all possible only through:

We continue, through our website, to get as many people as possible to give donations to St. Jude Children’s Research Hospital and show how much our collective love for Lando can be shown through our support of such a great cause. We also have a great Pre-PAX Podcast with our hopes for what we wanted the Lando Society to achieve at PAX and a detailed recap of the prank after it all went down.

For now… May you all go forth and Never Forget.

PS: The Lando Society, Parts 1-3, is now available on youtube!